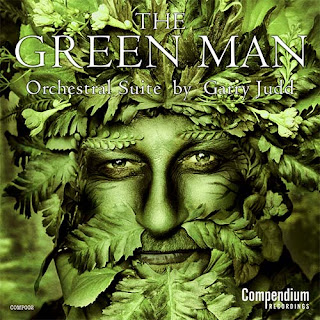 The Green Man orchestral suite is now available on iTunes by clicking on this link...

The album also includes a piano arrangement of Elegies (and Energies) from Book 2 of Multiple Field Sketches for small orchestra. When I decided to make this piano reduction, it occurred to me that I could do this in situ alongside the original orchestral arrangement in StaffPad. This would mean that I could refer to the score as I proceeded into the piece and even copy and paste parts into the piano arrangement. So, I copied the StaffPad orchestral version, opened it and subtitled it 'piano arrangement' so I had two new identical versions. There may be an easier way of doing this...Maybe the StaffPad people could enlighten me, but I wanted to preserve the orchestral version as it was and this was the best way I could figure out to do that.

I then added a piano part to the new version and found that it was a delight to work on this while referring to the original version alongside it. Copying and pasting worked a treat...In 'Elegies' there are some pretty complex cross rhythmic hemiolas which would have been a bit of a task to replicate and I found the new lasso to select function very useful. Pasting selections into different voices is, necessarily, a bit fiddly as you have to keep selecting the right voices to copy and then paste into, but StaffPad intelligently sorted the beam directions (even in interweaving parts) and made the job easy.

Before very long, I had a complete piano arrangement and I then deleted all the other instruments...Fantastic!!! If you do this from a fully notated (with directions and dynamics), these can be copied and pasted in with the actual music.

I'm currently working on some arrangements for large orchestra and am working in a similar way, except I added the new instruments to the orchestral score resulting in a sort of semi-filled template.

Of course, like all music where there is a possibility of copying and pasting, you have to guard against being lazy and think about whether the voicing and timbres will work when one part is transferred to another instrument, but that's what being a composer is all about, isn't it???

We had a huge thrill recently when we spotted a kingfisher diving for beetles in the pond. It's a couple of years since we removed the Koi carp that we inherited (they were not doing well as the water was not properly filtered for them, so we found them a lovely new home) and removed the leaky liner to make it into a natural wildlife pond. It took a couple of weeks, during which we smelled permanently of silt, but we've ben really pleased to see all sorts of wildlife make their home in there...Great diving beetles, water boatmen, greater crested newts, dragonfly larva are all in there and there are often ducks and moorhen on it. The kingfisher was a real surprise...We're not sure where it comes from, but there are larger areas of running water nearby where it must make its home.
at Sunday, February 07, 2016 No comments: