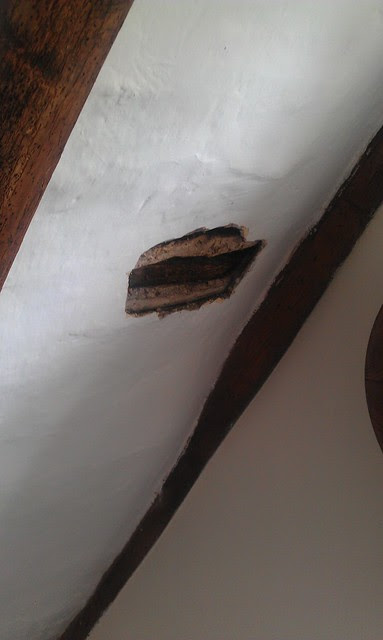 A couple of weeks ago, we noticed a wasp nest had formed under the eaves in the roof. Unfortunately, there's nothing that can be done with these apart from having the pest control man round to deal with it. The day before he arrived, I poked at a small crack that had appeared in the front bedroom and my finger went through the plaster...The wasps had eaten the back of the plaster off under the thatch and were about to invade!!! The hole in the picture shows the laths behind the plaster, with the thinnest part of the eaten through plaster removed. This will be patched up soon with hair and lime plaster in the traditional manner.

The chimney sweep is also booked for the end of the week which is also when the major earthworks at the back will be begin to be tackled. The current patio area is about six inches too high which is bad for drainage, so this is all going to be dug out and replaced with more sympathetic stone slabs and reclaimed bricks. We're also having a brick path intersected by a brick circle and reclaimed gazebo through the bed by the pond. We're also adding a drain into the pond from the patio as well as rerouting the electrics directly to the septic tank area where the current inspection hole will be turned into a pumping station to take excess water onto a soakaway on the new piece of land. All very exciting, except the digger and dumper truck will make a mess of the lawn...Should soon start looking good in the spring though!!!.

In music news, Artful have just released my album Pulses 2 and will soon have Atmospherics IV at the manufacturer soon.

I'm also talking to a director about an ITV job and there is a 1 hour documentary in discussion too...More news soon.

I bought Celemony Melodyne a few weeks ago and it's excellent. It can adjust indvidual notes in an already mixed recording...Amazing!!!

The Water Boatman is showing on Tuesdays and Wednesdays at 9pm and 9,30pm on Discovery Shed.