It's been an interesting couple of weeks in Tumbledown and out and about!!! The Limelight, a feature I wrote some music for was premiered at the London Independent Film Festival last Friday. It went really well and it was great to meet some of the cast and crew. I decided to stay over in London that evening as the film started quite late, so we had a great time in Borough food market the next morning.

The day before LIFF, I met with a director to talk about his new project...More news on that soon.

We've had some weather at Tumbledown...Lots of rain and wind. The pond has been filling nicely without the liner and we're looking forward to see it develop over the coming months.
at Thursday, April 26, 2012 No comments:

Giant Octopus is being shown on Nat Geo Wild and Nat Geo Wild HD on Saturday 21st April at 5pm, Sunday 22nd April at 3pm and Monday 23rd April at 3.45am. The music for this was written in 5.1 and to picture.

The pond is now clear of all liner and decking and has been planted with a selection of native plants. Just in time, as the weather has changed to heavy downpoars with sun inbetween...Ideal for growing!!! The grass on the verge has finally germinated and the front boarder is beginning to take off too.

The Limelight, a feature I wrote some music for will be shown at the London Independent Film Festival at 9.30 pm on Friday 20th April 2012

New Home DIY is showing all week except Sunday on Discovery and a double showing of Central Steam is on Monday 9am and 9pm on the same channel.
at Tuesday, April 17, 2012 No comments: 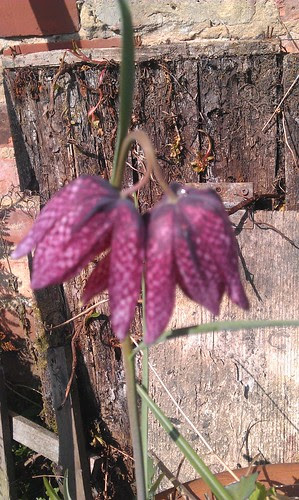 This is a double Snake's Head Fritillary we've grown...The petals where they meet are fused together...Very strange!!!

We've had a bit of weather after the lovely warm spell...Things have cooled off, especially at night and we're promised some thundery and rainy weather to come. Not all bad news, as England now has a hosepipe ban because of the drought that has been developing this year. Tumbledown Studio remains quite moist thanks to the clay soil which keeps the water table high, but some rain would still be welcome.

We've been working on the pond now that the front garden has been finished with grass being sown on the verge (still waiting for that to sprout). A lot of the silt and liner has been removed and the banks planted with native Iris. The decking has been taken down and the land revealed will soon be landscaped and planted.

I'm currently working on three albums for Artful while I'm waiting to hear about a couple of new jobs (More news soon) and have been spending my spare time on my experiments in modern pastoralism, which is coming along very nicely...I'll finish the third piece and will post all three on Flickr. I reckon it'll be five or seven movements in all.

The Limelight, a feature I wrote some music for will be shown at the London Independent Film Festival at 9.30 pm on Friday 20th April 2012.Shortwave is near London Bridge. More details at www.thelimelightmovie.com
at Wednesday, April 11, 2012 No comments: