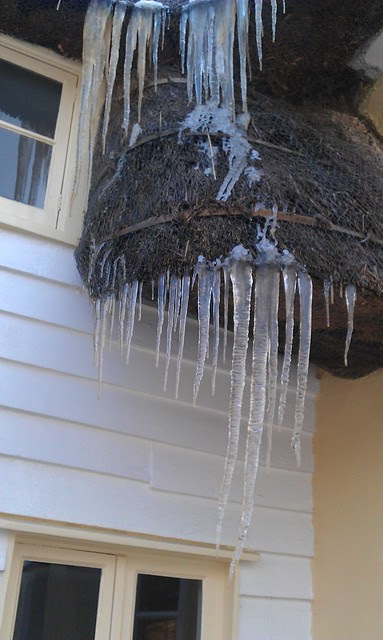 Here are some Icicles that formed on the thatch at the back of the house!!! We've had temperatures of -14C which is quite unusual in this part of the UK. Until a few days ago, the ground was covered with about five inches of snow, but it's now nearly all gone...The pond is still frozen over.

Snowdrops and other bulbs have been doing their best to push through and there have been some interesting wildlife tracks left by the many creatures that pass through the garden at night.

A couple of things I've written music for have just gone on sale. ENDEAVOUR is a CD I have written in collaboration with Matt Norman and is available from iTunes HERE.

I also have an Amazon eStore which has a lot of my music available which is HERE and on the sidebar over there>>>
at Wednesday, February 15, 2012 No comments: