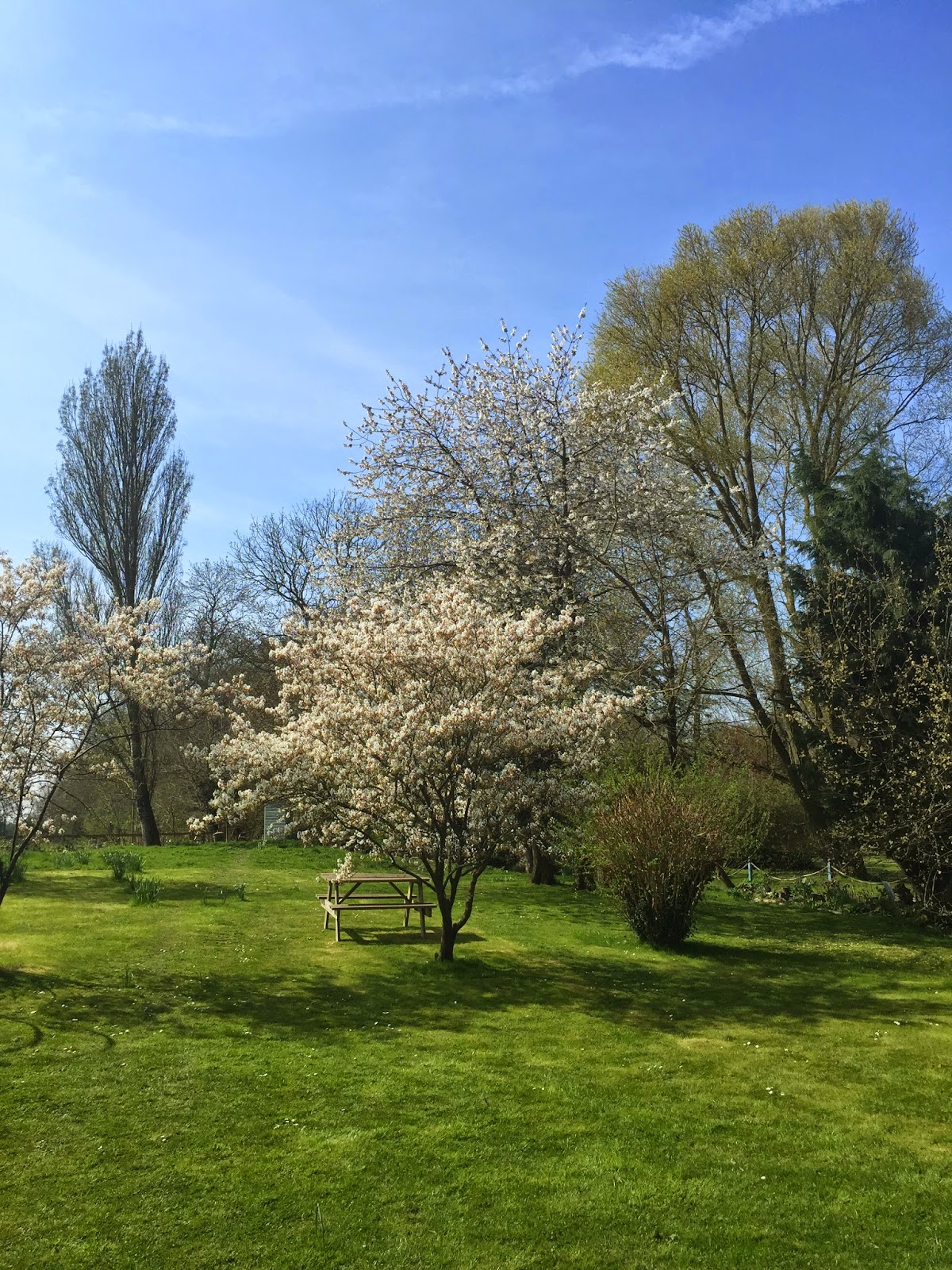 Had a fantastic time in the USA meeting old and new friends in the music publishing world. I've returned to find that the garden has really taken off...Here is some cherry blossom that has come out in the past few days.

StaffPad and Surface and Sibelius.

My review of the new notation recognition software seemed to go down well...Thanks to everyone who shared and retweeted. I've also demonstrated it to several composer friends from the UK and USA. I noticed that Sibelius are promising an upgrade which will take more advantage of the Surface facilities, but I don't think this will include handwriting recognition. Stuart Pitts from the Surface team at Microsoft was kind enough to retweet and looking at his timeline reminded me that the Surface is a fully featured Windows 8 computer and will quite happily handle Sibelius too. So, one of my next projects will be to load it up and see how the workflow can be handled between the programs on the same machine.

Incidentally, I handed the Surface to my cousin who is an artist when I visited my family in Southern California last week. She thought that it was the nearest thing to real watercolour and paper that she had ever tried...This was FreshPaint which came pre-installed. The first thing on my wishlist for the Surface is that they produce one which is two or for times as big so you can set it up like drawing board...Would be great for composers, artists, architects etc... alike!!!

It's occurred to me that the Surface has accomplished something I have managed to do with my recording desk, which is to create a familiar hands on user interface which has the power of digital underneath. I'm still figuring out how to fit the Surface into the studio...It would be great if Avid (who produce Sibelius and the Artist Control series) could get the Sibelius transport (and possibly the mixer functions) to be controllable by the Artist Series hardware.

It's been pointed out to me by a fellow composer and publisher who has fitted a fully functioning studio into an RV, that the length of ping from dish to satellite makes it impossible for collaboration to take place using Cubase Connect Pro. So, time to rethink the internet collection here in Much Hadham.
at Monday, April 20, 2015 No comments: 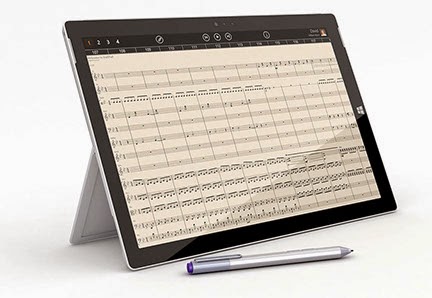 I've always considered myself very lucky to be around at the time when music technology really took off. Without MIDI and computers, my output of recorded music would have been much smaller.

With instrumental sessions and my written 'serious' music however, it has been more of a struggle to get the music in a state to be played. I started my career writing music with a pencil onto paper. It's the way I mostly visualise all my music as I make it, so it's great to just grab a pencil and just write it down. The problem with this, of course, is that you have to write it all out again when you need parts.

I've had the scoring program Sibelius through several different versions...I'm now on 7.5 and it has vastly improved over the years. However, excellent though it is, I find it a real effort to write music with it. Give me a pencil and paper and I'll happily forget lunch, but having to drag notes onto a staff or play notes in manually and editing them is just not fun. NotateMe was great, but it was still not quite intuitive as the handwriting recognition took place in a different 'window' rather than in situ.

So, when I heard about David William Hearn's StaffPad, I was very interested indeed. It's an app which allows the composer to write music with a pen onto a tablet screen. The music looks like handwritten music when input by the pen, but when the end of the bar is reached, it snaps into proper engraved music notation. The price of the app itself is a very reasonable $69.99...I'm sure they could charge a lot more, but the bad news is that the only hardware that can cope with this is the Microsoft Surface (ideally the i5, 259GB Pro 3 version). It's the active pen which makes the difference.

A couple of years ago, I moved over to Apple products and have since become quite an annoying Mac enthusiast. The thought of having to buy a Microsoft machine for one app was a bit of a leap, but the lure of being able to write music so intuitively was simply too much. So I went and bought myself a Surface and here is how it went...

My first hour or so with the Surface was very frustrating. I had a terrible job trying to get my UK Microsoft account to work out that I was in the USA and I wanted to pay for StaffPad on the US Microsoft store with a UK card. In the end I decided to start a new account and try over again which eventually worked.

In my rush to install StaffPad, I realised that I wanted to change the default folder for storing StaffPad scores. Not being familiar with the Surface, I emailed StaffPad support and was amazed to get a response from Matthew Tesch, the lead developer himself by return, despite me being on Pacific time meaning that it was in the early hours in the UK...Top marks!!!

Now, onto StaffPad. Friends and acquaintances will know that I am a naturally reserved type of chap. When I first put pen to Surface and my first bar popped into perfectly engraved notation, I quite literally whooped with joy. I might even have punched the air.

There is a tiny bit of a lag in the pen movement (maybe there is a setting for this, I will explore later), so it takes a bit of practice to learn how StaffPad likes you to input for best recognition. As I'm getting used to it, it is becoming much easier to write in a way which the app understands. Recognition is improved if you zoom in for writing...The usual pinch gesture works nice and smoothly.

The various functions are really well thought out and intuitive...For example, to copy and paste, you double tap with your finger to select a bar and then tap on the end bar to select the bars to copy. You then click on the copy button which is on a toolbar which pops up when the first double click is performed. You then select where the pasted bars are to go to select and then click on the past button. Transposing is just as easy.

In the few days I've had StaffPad, I have created a nice stack of music, all in various stages, happy in the knowledge that I can go back to them and work on each one as I get an idea...Much better than working on a stack of papers or a notebook.

I've opened StaffPad scores in Sibelius and vice versa via MusicXML and this works very well...Especially (as suggested by StaffPad) you store your scores in your OneDrive folder so it syncs to your Sibelius computer (there is a Mac app too). I reckon that I'll be writing and printing for smaller instrumental sessions directly from StaffPad, but would want to polish the larger work in Sibelius and print from there. This is ideal for me as it was always the inputting the notes that I found arduous. StaffPad are promising various upgrades and improvements, so this may well change.

FYI, it will also play back the music for you...Something that I find troubling, as I have all along with Sibelius. I've said before that if you can't hear what you're writing in your head as you write it, you really shouldn't be bothering at all. However, I suppose that it's handy for checking that all those pesky notes and accidentals are in the right place and the export .mp3 function is useful for demoing ideas for clients before any expensive sessions.

The Surface is very comfortable to work with and the pop out stand presents it at a comfortable angle for writing landscape style. I prefer portrait myself, so I don't use the stand much but the screen bezel makes it easy to handle in portrait mode without pressing things you don't need. It can also sense when you're leaning your wrist on the screen which makes it just like writing on paper.

I have a few instrumental sessions coming up...One orchestral, so I'm busy writing these parts on Surface. The only part of the pencil/paper method I really miss is taking five minutes to sharpen up the pencil and make a cup of tea. I've got a feeling that I'll be missing more than just lunch from now on...I could do with losing a few pounds!!!
at Wednesday, April 15, 2015 No comments: