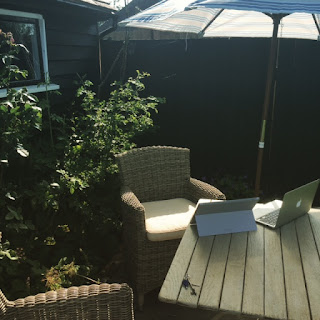 Please note that this is an older post that didn't get published!!!

Lovely weather here in Hertfordshire, so I've been able to work outside. Here's a nice spot on the new patio which catches the Sun in the mornings before it hides behind the big field maple next door. I had a lovely sunny editing session here before transferring back to the main spot at the back of the cottage and then remained there all afternoon.

Editing isn't my favourite part of the job, but it was very pleasant under the parasol with the sound of conbine harvesters moving to and fro in the background. A wood pigeon kept swooping low over my head as it collected sticks from around the pond for the nest it's building in the big oak in the front garden.

Earlier, I'd loaded up Cubase Pro 8 onto the Surface thinking that it might be convenient to edit on. I thought that the pen might be a more intuitive way of moving the music to the correct length and drawing in the fades. Sadly, it wasn't to be as Cubase defaults to a screen resolution which made editing fiddly and also the audio insisted on coming out through the speakers rather than the headphones I'd plugged in. I'm sure that this is easily resolved after a bit of tinkering, but I'm up against a deadline and haven't got time to mess around. It'd be great to use the Surface for editing...Apart from the possible advantage of using the pen, it'd be much easier to use on, say, a plane. I've done a bit of editing on long haul flights, but on a laptop with the constant worry that the passenger in front might recline their seat, probably shattering the laptop screen in the process!!!

I posted about moving Multiple Field Sketches to Staffpad...I'll be doing these scores as final versions, i.e. No polishing with Sibelius. While it's really useful to go into Sibelius via .musicxml files for extra neatness, it does add a considerable amount of time to completing a score. The whole idea of the MFSs was to put down ideas quickly, so that's what I'll be doing. The scores and parts will be perfectly readable. I'm planning some more orchestral sessions soon, so maybe the recently finished Power Harrow will find itself as part of those.

I've recently finished a rerecord/remaster of On Vacation, an album I originally recorded *cough* years ago, This will be available on iTunes etc... very soon and also via www.chillvillemusic.com .

I'm also starting a 'classical' record label. When we recorded Leslie Howard's two albums for Artful, Leslie also recorded some music by Mozart, Beethoven, Schumann and Grieg. It was always my intention to put these out digitally via a new label, Compendium Records. The first Leslie Howard album will be followed up by some original compositions by Leslie and a further album containing some orchestral music by myself. More news on this soon.

Runner beans are now on stream (my favourite veg) and the sweetcorn is swelling nicely and should crop soon. The sound of combines have been toing and froing day and night despite a few interruptions due to rain. 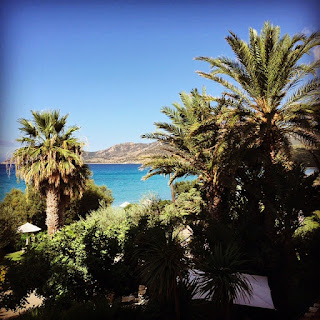 We've not had a proper holiday for ages...We've always taken short breaks when we've been travelling for business, but decided it was about time to have a proper do-nothing holiday.

So we booked a week in Sardinia, and very nice it was too...As you can see from the pic above, the scenery was stunning and the hotel and food was very nice indeed. It wasn't quite a do-nothing holiday, as I took the Surface pro 3/Staffpad along and did a bit of writing...But that's how I relax, so it was allowed!!!

While we were there, I read two books...Gone Girl (having seen the film last year for BAFTA) and The Martian. The book made it plain that there was an upcoming film coming soon and within a week of returning home, I got tickets to the London premiere. There was the usual embarrasment of walking up the portion of the red carpet that everyone has to with the reporters thinking, "Paul Hollywood has let himself go," but we got in to find that it was in 3D. I liked the film, but wasn't too sure about the 3D. Anyway, a nice evening out with a very good dry Martini in the Hampshire Hotel on Leicester Sq.

I've just launched a new classical imprint...Compendium Recordings and our first release is Leslie Howard plays Mozart, Beethoven, Schumann and Grieg and it is available HERE . The next releases will be Études in Black and White op.47 played and composed by Leslie Howard and then The Green Man and excerpts from Multiple Field Sketches, by me.

Also in progress are the latest album for Artful and a very interesting international TV project which I'll tell more about at a later date. I'm also planning two more orchestral sessions, one of which will definitely be this side of 2016...I'm busy with the score and part making right now.

As far as Tumbledown goes, it's definitely the last days of Summer with Autumn knocking on the door pretty hard. The leaves have begin to fall and there is a distinct chill in the air. I'll soon be adding to the Autumnal atmosphere by having a bonfire of the pile of tree and shrub trimmings while chopping up firewood for the winter (chainsaw maintenance needed!!!). We'll be self sufficient in firewood for another year as there is still a plentiful supply right down the end of the garden.

The vegetable patch is changing seasons...The runner beans are nearly finished as are the courgettes, chilli, sweetcorn and tomatoes. The leeks are fattening up, but we have an absence of parsnips as they didn't germinate, or were eaten by mice...Not sure which. I've rather taken to peppermint tea, so we're drying leaves to have over winter and the damson gin (first crop of damsons from our new tree) has been made and left to brew.
at Monday, October 05, 2015 No comments: