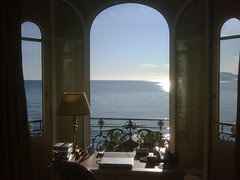 Lovely trip to Cannes for MIDEM. The first couple of days were a bit overcast and rainy, but the three after that were glorious!!!

Met many old friends and sub-publishers from around the world and made some interesting new contacts too. Good to hear that Artful is doing well overseas.

Found a fantastic restaurant called Festival (thanks to our Scandinavian sub-publishers) which is near the Carlton. Great food...Best spinach I have ever tasted and they went to great pains to make sure that my food was vegan.