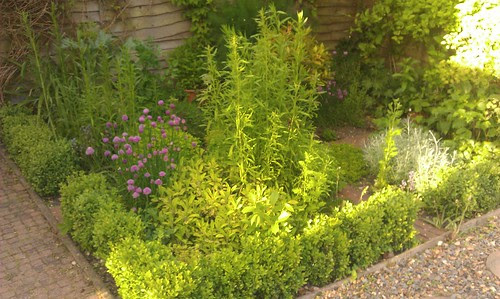 Here's a pic of the Tumbledown herb bed!!!
What an amazingly busy few weeks...

Workwise, some Arabian music and an Italian piece for broadcast and news of some of my tracks going on another compilation, finishing the editing and de-noising of a classical piano album I produced as well as releasing two whole albums of my music.

I'm currently in Dublin for music meetings and also went to Taste of Dublin yesterday...Fantastic evening!!! It's also good to hear that I've had a lot of music used here on RTÉ and TV3 and TG4 shows including Fair City, Nationwide and Siar Ó Thuaidh.

Good to see a lot of repeats with my music now showing in the UK, particularly Giant Octopus which was on Nat Geo Wild and Nat Geo Wild HD last week.

Also, there will be some interesting Artful news in the next few weeks!!!

I've been using Izotope RX2 for the de-noising...What an amazing piece of software!!! I've been using it in stand alone mode and soon got to recognise wisps of shadows in the spectra as birds tweeting, chairs squeaking or mechanical taps. I was particularly impressed with the Spectral Repair tool to smooth these artifacts away...The Noise Reduction tool was good for spot noises like pedal thumps which could have an effect on the lower end of the piano notes that you don't want to interfere with. I can't wait to play with it as a creative tool...More news soon.

We had a nestful of moorhen eggs on the pond, but sadly they were sniffed out by a magpie. They seem to be trying again but we can't find where the nest is...Hopefully, the magpie won't either. Also on the pond, we spotted a pair of mandarin ducks on a shord visit a few weeks ago. They were a very feisty pair and terrorised the local mallards, although a regular visitor male pheasant wasn't impressed and refused to be bossed about!!!

The veg area is taking shape. The new shed is up and the greenhouse is full of lovely veg and other stuff for the garden. The rabbits have discovered the plants and we've had to put up some temporary chicken wire protection around the beds. When the fence around the veg plot is completed, the idea is to put the chicken wire around it and bury it so that the little critters can't get in to the entire area and eat the whole lot!!!