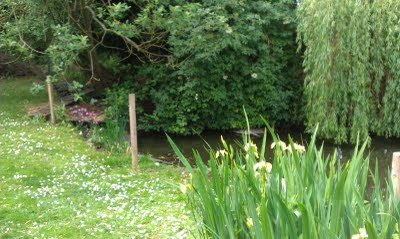 We've had some lovely Spring days here in Hertfordshire. The wildlife is thriving with sparrows, blue tits and great tits nesting around the garden. Sadly, the first clutch of moorhen chichs didn't survive, but a second batch of eggs have arrived and are due to hatch in a couple of weeks, so good luck to them!!! A duck with three chicks has turned up from somewhere and they're whizzing around the pond like mad things.

I finally got round to putting the finishing touches to the suite for oboe and string orchestra which I wrote on Lundy earlier this year. It's called The Shipping Forecast On Lundy and was inspired by listening to the shipping forecast on BBC Radio 4 and realising that I was actually in one of the featured places in the broadcast!!!

Speaking of travel, I'm pleased that I am at home now that another Icelandic volcano has erupted. While it was very nice to spend some extra time with my friends and family in LA because of Eyjafjallajökull, one month was far to long to be away from home!!! Hopefully, Grimsvotn won't be as disruptive...Although it would be interesting to see the sky empty of contrails...Something I didn't see last year.

Village Green Studio has been busy...I'm just finishing the 5.1 documentary I mentioned a few blog posts ago. As often happens, I'm leaving the opening sequence until last so I can write the music to picture and get the title music in the right place. It's been an interesting project and has involved a lot of different music influences...More news soon.

Here is a new trailer for Signs Of Life from the director John Dower...Music by me!!!

Trailer for "Signs of Life" from John Dower on Vimeo.

A short break in Cannes. The Sharon Stone Suite in the Hotel Carlton.