It's been a while again. I didn't think that it'd be possible to be more busy than I was over the summer, but it has been. Aaron (My brother and agent) got me a 100 minute documentary in 5.1 surround sound!!!

This meant that I had to get some more monitors. I got Tannoy Reveals for rear and centre and a sub-woofer which matches my existing Tannoy System 8s. I also had to get a sound level meter to calibrate the sustem and I have to say that it sounds terrific. I get all the outs I need from the Yamaha 01x (with a bit of fiddling about) and Cubase SX3 is surround enabled...Brilliant!!!

I'm also working on a short film and a feature...Should keep me busy for a while.

Another job which is now finished is the Czech radio job. You can now hear my idents/news/weather etc... on these stations...Click to listen...

I've been to the guitar shop again...I decided to get a fretted Warwick Streamer Jazzman LX fretted to pair with my fretless...

The fretless has such a lovely sound and feel, I thought that this would be a great partner for it!!!
at Sunday, December 17, 2006 No comments:

A lovely city. We went to visit our sub-publishers who we have met a couple of times in London. They a re a really lovely bunch...A family company, who are really great to deal with.. We also met up with our friend Pavel who works for them and he was kind enough to drive us back to the airport after a fantastic lunch in LEHKÁ HLAVA (Clear Head) (Boršov 2/280, Praha 1 - Staré Město, Otevřeno: Po-Ne 11:30-24:00 Tel. rezervace: 222 220 665), a wonderfully strange vegetarian restaurant hidden away in a lovely backstreet. The food was terrific and the atmosphere wonderful (check out the gallery on the website!!! I'm currently writing the music for CRo (Czech broadcasting) regional radio network, so hopefully we'll be back soon. I got the job through our sub-publishers!!!

A flying visit to check out MusicForProd, a new online system for production music online downloads which was developed by our French sub-publishers. We decided to buy the sustem...You can see it in action at www.artfulproductionmusic.co.uk. I popped up to Montmartre to look at the fantastic view over the city and on my way back to the airport, I managed to fall down the gap between the metro train and the platform!!! Luckily all I damaged was my pride (badly) and my shin (a nasty bump). I am now considerably more careful when getting on and off the tube!!!
at Thursday, October 12, 2006 No comments: 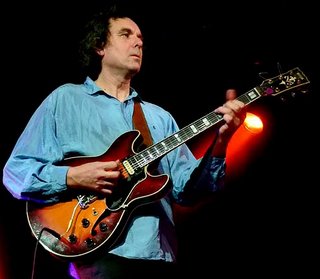 Tuesday 8th of August was a particularly exciting day...John Etheridge ( Website ) came up for a session for a couple of chillout tracks I'm working on. I've admired John's playing for many years, having seen him with Soft Machine on the first ever simultaneous TV and stereo radio broadcast (Long before the days of NICAM).

The session was fantastic and I hope to record vocals on the two tracks (Archer Street and Côte d'Azur) very soon.
at Friday, August 11, 2006 No comments:

I've realised that at this rate, I'm never going to catch up with my latest travels in this blog, so I thought I'd polish a couple off in one go...

Paris (2005) - Fantastic, cool city. Our sub-publishers are in the 14th arrondissment which is a really nice area...A bit like Soho crossed with Covent Garden and Camden. Met our sub-publishers...Once again very nice people and saw many of the sites of the city. We found a nice vegetarian restaurant which I can recommend (Piccolo Teatro 6 rue des Ecouffes, 75004)(The waitress was from Southend!!!). Took a stroll through Les Jardins Des Tullieres (Trés chaud) on the way there and walked back through some very cool gay and Jewish areas before getting the Metro back to the hotel.

Cannes (Jan 2006) - This was a trip to MIDEM, the music conference. That went very well...Got a new sub publisher in Germany...Worth the trip alone!!!. We were really impressed with Cannes though. It's a lovely spot. I did a sort of tour of hotels. I started at The Garden Beach in Juan-les-Pins and due to good upgrade skills ended up in one of the best rooms in the hotel. It had a private balcony with fantastic views over the bay...It was lovely waking up to hear the waters lapping at the beach below. We finished with a couple of days at the Carlton, where we were upgraded again...Had a fourth floor room overlooking the sea...Perfect!!! The Bar des Célébrités does a fine Martini. I also had a night in the Hilton...I was upgraded yet again and had a fantastic room which wouldn't have looked out of place on a James Bond film set. As usual, I have a restaurant recommendation...It's Al Gambero, 18,Rue du Commandment André, 064000, Cannes...A really nice and friendly Italian restaurant.

...Include music idents for CRo the Czech radio network, the latest Trinny And Susannah show and a new track, Archer Street by The Essence.

Also, the new Artful Production Music Website is now live and accepting registrations from UK based users of production/library music!!!
at Tuesday, July 25, 2006 No comments:

Yes, there have been a few more aquisitions...

I really can't stress how good the 01x is...It's a FANTASTIC machine and does much more than most people think!!!

I had a vocal session on Saturday with a great singer called Matt Scales for a TV commercial. It was the first chance I've had to use the U87 and UA6176 and the recording is beautiful (Though I say so myself). Matt's voice is great...check him out at his MySpace Page.
at Monday, June 05, 2006 No comments:

Yes, it's been non-stop. I still owe the blog a write up on Paris and since then I've been to MIDEM in Cannes, Dublin and Prague to meet sub-publishers of Artful music. All were fantastic trips and I'll eventually get round to adding them to this blog.

At the moment, I've got a few jobs on and just haven't got the time...I'll be back soon!!!

New gear in the studio...