A track I wrote for the album THE ESSENCE has been on rotation on CHILL FM and I've had a few queries about it, so I thought I'd write a bit about how it came about.

It started with the guitar part which has a very seventhy feel. I put the guitar through the Pod and really liked the sound of it through a Leslie (the rotating speaker unit that was part of a Hammond organ...It makes a unique trememlo sound). I then came up with the melody. I was originally thinking of having a vocal singing, "In my secret magic garden" over the 'chorus' part, but after I played it on octave strings, I thought it had a sort of anthemic sound, so I decided to stick with them and add French Horns.

As I wrote on my Facebook page, I got so involved with this piece, that I finished it in about four or five hours and missed lunch...I really didn't notice time passing and sort of came to and it was finished...And no, I hadn't been to the pub!!! It just works like that sometimes.

I remember feeling that the piece needed an ostinato (repeated figure) to bind it all together, so I added the bell-like sound that opens the piece. I think I wrote this on my laptop and I went out into the garden at some point, which made me think of adding the birdsong.

The bass was played in one pass and I also added a palm-muted staccato guitar part to enhance the rhythm of the drums.

It was a really fun piece to write...It's always great when the music seems to write itself and it is a snapshot of how I felt at the time.

You can find it on Spotify and iTunes, or you could wait for it to come around on Chill FM
at Monday, March 26, 2012 No comments: 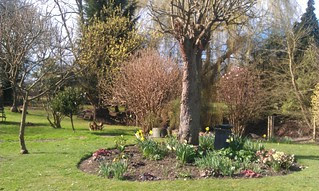 Spring has begun here in Hertfordshire...The snowdrops have flowered and now the daffodils are making an appearance as well as plenty of green buds in the shrubs and trees.

We were self-sufficient in kindling for the fire this year and it looks like we've enough for next year too. The tree and shrub trimmings have given us a huge supply and a few logs of our own too. We're planning a woodland section down the bottom of the new garden when we get the new piece of land and so we should be able to keep up supplies from this part of the garden from now on.

Over the past week, the pond has been emptied in preparation for digging out the silt and liner and returning it to its natural state as well as making it a little smaller. As I've mentioned before, it was never really suitable for the Koi Carp that were in it and we're hoping for some more suitable wildlife like frogs and newts as well as continuing to provide a home for the ducks and moorhens. There was a single duck quacking angrily in the centre of the pond as the last of the water drained away...Hopefully, we'll have it back in a habitable state soon!!!

I've got a huge amount of new sounds for the studio which I'm gradually working through to see what's most usable. I also upgraded to Cubase 6.5 which has a few new tricks up its sleeve which I'm discovering as I go along.

I'm expecting some exciting news on a couple of projects soon including a feature I wrote some music for as well as a couple of TV projects.

In other news, here are couple of albums I've contributed to which have recently been released...

...and I am just putting finishing touches to two albums for Artful...More details soon. 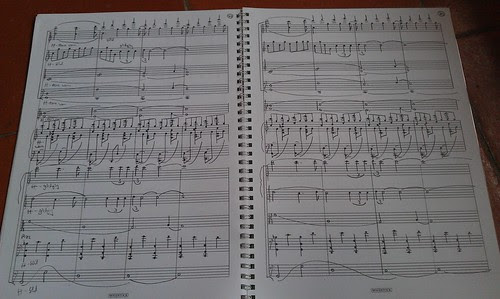 I was tinkering about at the piano yesterday and started thinking about a piece of music I wrote in 2003 called Across The Meadow. Funnily enough, I'd been sitting on it all along...There was a copy in the piano stool!!!

It's an early taster to the pieces I'm writing now in my Molskine books in its subject matter and approach...A sort of more gritty, modern pastoralism. It's for small orchestra and harp. 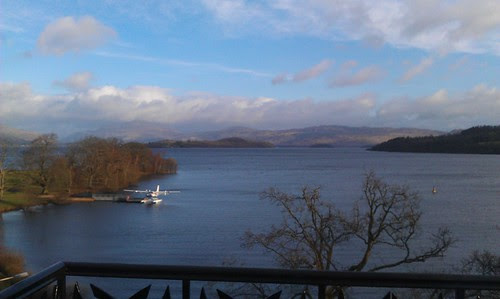 I'm writing this from one of my favourite places, The Cellar Bar in The Merrion Hotel, Dublin. I'm over here on a day trip for a few meetings and have had a lovely day walking around the city and enjoying the Spring weather on St Stephens Green.

It's been a busy time...This day last week, Jane and I were married on the banks of Loch Lomond having eloped to Scotland a few days earlier. It was a proper elope in that nobody know we were going...Even Jane didn't really know until the day we left.

In music news, I've been upgrading my sequencer and sound sources and will soon have a whole load of new instruments and sounds to play with.

Please check out my new album, Endeavour which I've written with fellow composer Matt Norman...It's available as a CD from www.chillvillemusic.com ...There are links to iTunes there too and you can also find it on Spotify.
at Thursday, March 01, 2012 No comments: