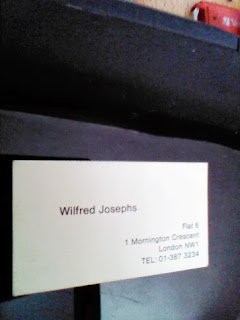 Been going through a few things recently (the reasons for which will become apparent soon!!!) and I found Wilfred Joseph's card. I met Wilf  at a PRS AGM and got chatting. I remember visiting his flat in Mornington Crescent which was quite something. It was split level and filled with pictures of him with famous people...He was a very accomplished classical and film composer...I remember one photo of him with Laurence Olivier.

Funnily enough I was thinking of Wilf recently when passing through Witney in Oxfordshire, where he had a cottage which he would retire to when writing.

I also found some of my earliest digital recordings which I've restored and added to...They'll be on iTunes soon together with The Essence: I Am Forecasting Sun EP.

In the garden, the veg plot has been cropping well, especially considering that it was planted so late. There are also lots of apples coming, but only one pear. There are some blackberries ripening in the field over the back and we've got the ingredients ready for blackcurrent vodka. This was the best fruit liqueur we made last year, so we're hoping to do as well this year. I might have another go at marrow wine, but definitely will try elderberry again. We've got plenty of fruit coming along in the garden, so I might try a couple of gallons.

There is some sort of bird of prey nesting nearby...It's been spotted taking a moorhen chick and its cries can be heard all the time. We've not been able to spot it yet, but we're keeping an eye out!!!

Airline USA is continuing a monster run on Sky 1.