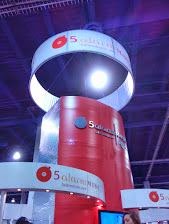 I've recently returned from a quick visit to Los Angeles, San Diego and Las Vegas. I stayed in downtown Los Angeles for a couple of nights, mainly in an attempt to get over the jet lag a bit...Last year we went straight into an NAB party after landing and were exhausted halfway through the evening. This way seemed to work much better and I was more or less back to normal by the time I got the train to San Diego, with a stopover to see family just north of the city.

It seemed a bit strange sipping Margaritas by the pool bar at the hotel watching the hummingbirds flit about, having just left a gloomy England, but it was a very pleasant evening stopover on my way to Las Vegas for NAB 2014.

As usual, I met many old friends, made some new and left with prospects of some new sub-publishers and some potential work writing for different territories too. I was also able to finish a new album using the portable set up and I edited the whole thing too...Some even on the plane. The trip over was especially interesting, as I found myself sitting next to Money Mark, ex of the Beastie Boys, who had been performing at the Barbican with Damon Albarn. We had a good chat about music and gear.

My new infatuation with Apple gear has continued...Just got an iPhone, an Apple Mouse, Time Capsule and another MacBook Air for the business side of things. I'm tending to compose in the garden or out of the studio and then taking it to the studio to mix...Very nice!!!


Airline USA is still all over Sky1, Sky 2 and Sky LivingIt.