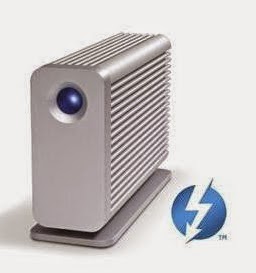 At NAB in April, I visited the LaCie booth a couple of times. I was very taken with their range of Thunderbolt Solid State Drives. Earlier this year, I bought the EWQL orchestral library and found the loading times and disk streaming very slow. I'm not sure what it was that was causing the USB3 bottleneck, but a Thunderbolt SSD seemed to be the answer. I recently got a 1TB Little Big Disk and am very pleased with it. Instruments load very quickly and the stream off the disk is fast enough to cope with heavy use.  I now have the EWQL library as well as Morphestra and Rumble on it. The idea is that I can take the LaCie with me when I know I'll need those sounds, but I can also have a pretty impressive sound battery with BFD3, Omnisphere, Stylus and Garritan sounds if I just have the computer with me. When I'm in the studio, the Lacie will daisy chain into the Belkin hub and run the studio from the MBA.

I've also been experimenting with ways of getting notation into Sibelius, and have bought NotateMe by Neuratron for the Nexus 7. This is a music handwriting recognition app and translates handwritten notes into a score. I can then upload these to Google Drive as music .xml files and then open them in Sibelius on the MacBook. It all works very well, but I need to get a better stylus as the response on the screen of the Nexus 7 is a bit quirky. This reminded me that I have a copy of Neuratron's Photoscore, which can scan in scores and 'read' them to produce a score on the computer which can be imported into Sibelius. I had a quick go on it with limited success, but I now have a better scanner, so I'll give it a whirl.

The trouble is that I really like writing with pencil and paper and would love to be able to write like this and then get scores into Sibelius without having to transcribe them note by note into Sibelius. A bit more experimenting to do!!!

I don't think I've mentioned my new website on this blog...It's HERE ...Thanks to Timo at W2-S.

It's been a busy few weeks...I've written three albums for Artful, prepping scores for a future orchestral recording and coming up with ideas for my Danish publisher. The garden has really sprung into life and the lawn seems to need mowing once a week. Our first year of wild meadow looks good, if a bit scrappy. Not surprising as it needs to be cut a few times to get an even grass distribution. There are quite a few species of wildflower in there too. Some need to be weeded out (buttercups, mallow) as they're taking over from the grass. It'll soon be time to buy a scythe!!!


Highland Airline is showing on Sky 1 and 2 and TV3 in Ireland.