It was a Guinea Fowl...Was having a chat about this and it turns out that someone had a fox break into his run and took some chickens and the guinea fowl flew off. 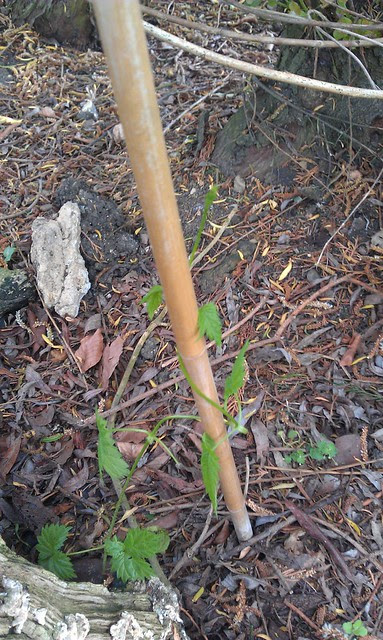 Earlier this week, I discovered a strange looking white chicken wandering around the garden at Tumbledown. This, in itself, isn't an unusual thing...We're often shooing chickens back to their owners because a couple of neighbours keep them. This was a funny looking one though...It had a very small head and a long neck. It eyed me cautiously as I crept up on it and bent down to pick it up. To my surprise, it flew upwards and into one of our neighbour's trees. I've seen chickens take to the air before, but it's more of a controlled plummet rather than actual flight. There was something about the way it took off  that seemed familiar.

A little later, I spotted it in the front garden. I tried to approach it more cautiously this time, but it saw me and flew over the road to the village pond. I decided to ask around to see if anyone had lost a chicken, so I went into the pub. As luck would have it, my chicken keeping neighbour was there, but he told me that his white hen had recently been taken by a fox. (There seem to be more foxes in towns and cities than the countryside at the moment. I was waiting for a taxi in Bishops Stortford yesterday and one came trotting quite happily down the high street.I wouldn't fancy its chances if it tried it down the lane here!!!).

Mrs. Judd had a Google and said that she thought that the mystery chicken could, in fact, be an albino pheasant. Suddenly, the familiarity of the thing in flight and its long neck and small head clicked...Yes, it could well be a pheasant!!! We get a lot of them in the garden, but I've never seen a white one before. I'll post a pic if I get a chance to take one.

The picture above is what I think is a hop which is growing down the bottom of the garden. This is potentially exciting because a previous owner of Tumbledown was a chap called Fuggle. He was from the Kentish family famed for producing the Fuggle Hop which was very popular for flavouring beers and is still used today. Our local brewer told me that Mr. Fuggle planted some hops in the garden here in honour of his family name, but the previous Tumbledown owner to us regarded them as weeds and dug them all up. On hearing this, we decided to get some replacements in Mr. Fuggle's honour. However, we discovered the plant in the picture right at the top of the garden at the weekend...We think that it is a hop plant which has been biding its time since the hop removal and have had a few gardening friends agree...If anyone has any more ideas, I'd be grateful to hear them!!!

Giant Octopus  is showing on NatGeoWild and NatGeoWildHD at 6pm on Saturday 26th May.

Octopus Volcano is showing on NatGeoWild and NatGeoWildHD at 12am on Sunday 27th May.

AIRLINE USA continues a run on Sky1 and Sky1 HD tomorrow!!! The schedule changes weekly, but it's on regularly every day except Sunday. 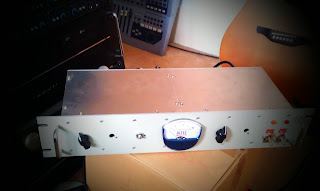 We're very lucky to have been lent a replica of the EMI RS124 by David Pendrill. First tests show that it has a lovely warm compression on bass, fretted and fretless...More news soon!!!

Plenty of rain and sunny interludes mean that the garden has really taken off. I'll post a pic in the next post.

OCTOPUS VOLCANO is on NatGeoWild and NatGeoWildHD on Friday 18th May at 1pm.

AIRLINE USA continues a run on Sky1 and Sky1 HD tomorrow!!!The schedule changes weekly, but it's on regularly every day except Sunday.

Here is a work in progress which I'm doing in my spare time...It's called Multiple Field Sketches and is a series of experiments in modern pastoralism.
There's a larger version HERE. Plenty of rain here so everything is growing nicely...I'll post some pics soon.

Aircraft USA is beginning a long run on Sky1...