Keeping in touch with nature... 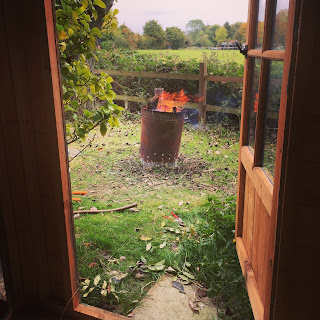 Writing and recording music can be a very esoteric enterprise and it's easy to lose touch with the natural world. Living in a thatched cottage in a tiny hamlet is a lovely way to keep 'grounded'. For example: This is the time of year when it's good to have a tidy up in the garden and have a bonfire to get rid of any branches and twigs that have fallen and been collected with any other garden rubbish. It's also the time I tend to get rid of any royalty sheets/accountancy stuff that we're no longer required to keep, so I literally 'cook the books' on the bonfire. This is where nature stuff like the wind direction comes in. We normally have a southerly wind here, which would blow any smoke back towards us and our neighbours, So, when the wind turns round to the north (usually bringing colder weather) conditions are ideal for a good burn up.

This happened yesterday and I soon had a good blaze going with the smoke giving our neighbour across the field a wide berth and continuing into the open countryside beyond. I took the opportunity to get some of the cut logs that have been seasoning down the end of the garden beyond the summer house and split them ready for the cold snap that the wind was bringing.

Log splitting with a heavy maul is a very satisfying thing, especially when all goes well and the log splits in half first time with a lovely crack...A bit like hitting a six in cricket, or I suppose a home run in baseball. There is a sort of 'Murphy's Law' with logs which states that the smaller and flimsier a log looks, the harder it is to split. The only thing more welcome than a clean 'six' is the first proper cracking noise a stubborn log makes after a sustained battering!!!

All this is a nice contrast to wiring up the legacy rack and the second monitor in the studio. The rear speakers are in their permanent home on their new brackets made by a local metalwork/blacksmithing friend. On the musical side, Artful released a new disk last week which is now available worldwide and I'm at the final stages of mastering my first classical release for Compendium Recordings.

Snow followed the northerly wind overnight...It didn't settle for long despite cold temperatures and ice on the pond. This is also the time of year that our thoughts turn to warmer climes and we begin to plan the annual trip to LA and Vegas. I'll be in LA from 11th for five days before heading off to Vegas via San Diego. I'll probably be back in LA in October. 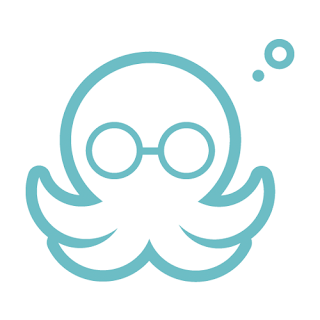 I'm all for things which can make more time for composing and Edgar has proved to be very useful in that regard.

It's a way of posting to social media from a library of posts which you can add to when you have time, and then schedule those posts to a timetable, rather than have to think them up and post them on the fly.

It's incredibly easy to use...The way of adding to the library of posts has been particularly well thought out and makes the process very straightforward. This makes it easier to come up with posts that will really interest your followers. Posts can be grouped into types...ie. 'promotional' and 'funny/inspirational' and then scheduled by type and social media accounts via a grid. Accounts can be with Facebook (including pages), Twitter and LinkedIn.