Special thanks to AJA for the following YouTube links to TV shows I have written music for in the past...

Escape To The Legion: http://www.youtube.com/watch?v=O1aJQ487mbw 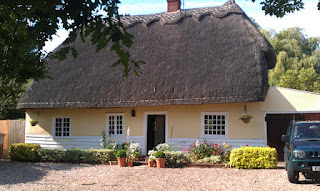 We're having an Indian Summer here in the UK...A couple of days of blue skies and sun which have driven the Auntumness in the air away. Not for long though...Soon it'll be time to start sweeping up the leaves and lighting the fire in the evenings.

We had an unusual visitor last week. I was sitting by the pond and heard the loud fluttering and splash that announced the arrival of the ducks. I noticed that one of them was a bit smaller than the others and as I watched them clamber out of the pond, I realised that it was moving differently...Although it was very similar in markings to a Mallard, this was something different. I called my neighbour who is a keen bird spotter and he was round in a few minutes. It turned out that the unusual duck was a Garganey, a very secretive and quite rare species. In fact, he reported it to the local RSPB as it was so unusual, particularly as a garden visitor.

The parsnip and the elderflower wines have now all been bottled and a batch of marrow is bubbling away. We also made some blackberry vodka (with fruit from the new land!!!) which is a fine colour and should be ready in a couple of months. Runner beans and courgettes are now cropping nicely.

Finally installed Sibelius 7 and Photoscore Ultimate which I'm experimenting with...More news on that soon. I'm still not sure whether to write Multiple Field Sketches Book II in Sibelius or in a Moleskine. Moleskine is more portable, but Sibelius is easier when parts are needed.